3 ways way to deploy your own IoT network

Today, with the strong growth of the IoT domain we can now choose from a large number of communications protocols. Many of them are very similar in nature and functionality, this may confuse customers during their decision-making process.

Let’s compare the solutions through a practical  example – building your own network in a city:

Choosing LTE-M is the easiest but also the most expensive way when compared to SigFOX and LoRa.  It’s necessary to establish a rate, pricing and SIM card for each device deployed to your network. But you should also take into consideration that deploying a new technology requires time and increasing LTE coverage will be gradual.

By choosing SigFox  it is recommended that you check whether 868 Mhz or 915 Mhz frequency is allowed for unlicensed usage and also check the noise rate and usage by other devices. This is necessary to prevent collisions between nearby networks and guarantee stable wireless connections. The next picture helps to display the estimated data corruption in bit error rate vs environment noise level (transmitter power remains unchanged):

As is shown in the picture, a large noise level causes packets loss. Packets retransmission will increase the power consumption of the device and on-air time and delays as well as slow down your system in general. Also, SigFox has an asymmetrical link. It means that uploads are more powerful than downloads and it creates the possibility of collecting data from large numbers of end nodes, but reverse communication is much worse.


In the case of choosing LoRa you can be at ease about available frequencies because it works at a wide range of unlicensed bands: 466/866/915 Mhz. At least one of these frequencies will be available for unlicensed usage in your country. Also, by using more noise immunity modulation LoRa can provide reliable links in extremely noisy environments. Link reliability is represented by Bit error rate vs Signal-noise rate for LoRa:

From the diagram, we can clearly see that there is a high probability of a low error rate in much noisier environments than in SigFox cases. Notice that this protocol is symmetrical and provides ( same uplink and downlink bandwidth ) adaptive data rate to offer the best speed/reliability balance. Also, spread spectrum modulation creates the possibility of coexisting with narrowband transmitters on same frequencies.

Modulation means the process of varying one or more properties of a periodic waveform, called the carrier signal, with a modulating signal that typically contains the information to be transmitted.
If modulated signal energy concentrates in tight frequency ranges it’s narrowband modulation. Otherwise (dispersed signal’s energy) it’s called spreading spectrum.
There are 2 main types of the former. Mostly used in analog TV systems and FM radio :

With the coming of the digital world, spread spectrum modulation methods were invented as a supplement:

Conclusions of our review: 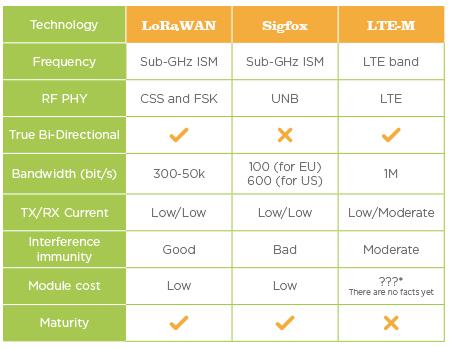